National Drive Electric Week was conceived in 2011 by Plug In America co-founder/communications director Zan Dubin-Scott and long-time EV driver Jeff U'Ren. They pitched the idea to Plug In America of holding a coordinated national series of events to raise awareness of plug-in electric vehicles and the idea took flight. Partnering with the Electric Vehicle Association and the Sierra Club, the first National Plug In Day was held on Sunday, October 16th, 2011.

In 2014, we changed the name to National Drive Electric Week to emphasize the revolutionary concept we support – driving electric – and to offer a broader range of dates to accommodate more events.

The first National Plug In Day took place on Sunday, Oct. 16, 2011. It was an unprecedented observance drawing global attention to the environmental, economic and other benefits of plug-in electric vehicles through simultaneous events staged in 29 cities across the nation.

The photo below shows the Santa Monica EV parade.

Below is a photo from the event at Golden Gate State Park organized by the Golden Gate Electric Vehicle Association. 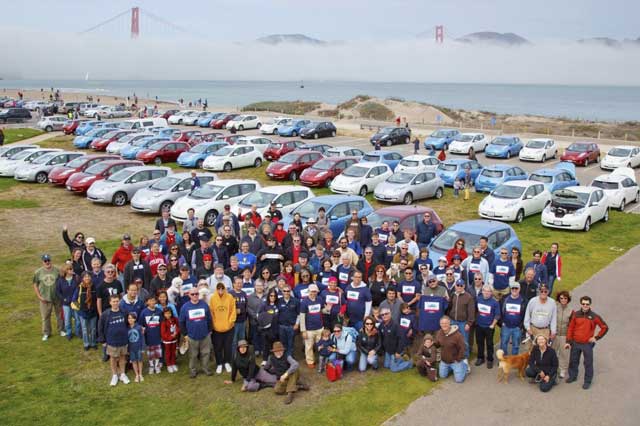 In September, 2013, events across the United States and other countries celebrated the third annual National Plug In Day. Hundreds of local volunteers organized 98 gatherings that reached out to over 36,000 attendees. Nearly 3,000 electric vehicles owners showed their cars at local events to show that driving electric is a viable alternative to being held hostage to gasoline prices. Local owners and car dealers together provided over 2,700 test rides or drives to attendees.

National Plug In Day had a noticeable impact on the market. Nissan reported that September marked a record month of sales for the LEAF; spokespeople for the California electric vehicle rebate project noted that rebate requests set a record immediately after the weekend.

Attendance at National Drive Electric Week 2014 more than doubled that of last year’s celebration with over 90,000 people participating in 152 events in 150 cities in 39 U.S. states and in Italy, Canada and The Netherlands.

"National Drive Electric Week organizers worked with local partners to expand our reach this year. Some organizers were able to stage their events at existing festivals and the like in order to attract passersby," said Tom Saxton, Plug In America chief science officer. "This contributed to attendance growing by an astonishing 150 percent. At the same time, the number of EV owners registered to share their driving experience with the public grew 148 percent to over 7,000, so clearly overall adoption of plug-in vehicles and the desire to communicate the passion is exploding, as well."

For the second consecutive year, California Gov. Jerry Brown marked National Drive Electric Week by signing six bills to encourage consumers to purchase EVs. Plug In America, national organizer of the event with the Sierra Club and the Electric Vehicle Association, worked to advance the bills supporting carpool-lane access for plug-in vehicles and access to charging stations at apartments and work places.

Plug-in vehicle sales typically rise after National Drive Electric Week and this year seemed to be following suit. “I already know of three people who have leased or purchased EVs,” said Woodland Hills, Calif. event organizer Eric Doroski. “I know of a couple who immediately went to a Fiat dealership and leased two 500e EVs. Similarly, a Ford dealership salesman staffing his own booth tried out a Pedego electric bike and promptly ordered one.”

September 20, 2014 Philip Robertson, a judge with GUINNESS WORLD RECORDS®, today pronounced a new world record for the most all-electric vehicles in a parade: 507. The record-breaking EV procession took place at the National Drive Electric Week event in Cupertino, California and was organized by San Francisco BayLEAFs and the Silicon Valley chapter of the Electric Vehicle Association More information is available in the press release. 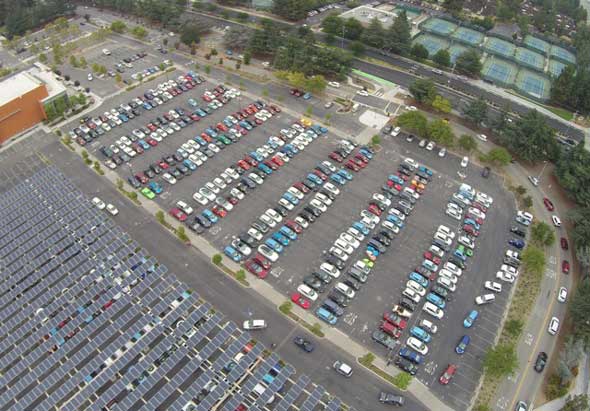 The Cupertino event was just one of 152 taking place in 5 countries, 39 US states, 6 Canadian Provinces and 150 cities in which owners of over 3,000 plug-in electric vehicles registered to share their electric driving experience with the public.

The Weather Channel did three segments promoting National Drive Electric Week just before the first events with Atlanta co-city captain Michael Beinenson. Kudos to the Weather Channel for great coverage of several of the most interesting plug-in vehicles on the market. Here's our favorite. See all three on our Media page.