The event was held in the North Blvd Town Square in downtown Baton Rouge. We had planned to hold a press conference with the Mayor to announce the City's Green Park BR initiative where the city and Entergy are investing in public charging infrastructure, but the event had to be postponed due to delays in the installations and the Mayor's schedule (our state recently suffered through unprecedented flooding).

The Sierra Club joined us on the lawn and had a tent next to our Clean Cities tent. We showed the movie, "Revenge of the Electric Car" on the media beacon. Prior to the movie starting we displayed the NDEW logo on the beacon and played "car" themed songs for the event.

The Mayor of Baton Rouge, Kip Holden stopped by for a photo opp and to show his support for our organization. We have many great photos of the event - I can send more that show the layout and the sign.

National Drive Electric Week Celebration in Town Square!
North Boulevard Town Square, Baton Rouge, LA
September 12, 2016 | 11:00AM - 2:00PM
Louisiana Clean Fuels, a designated Clean Cities Coalition, and the City of Baton Rouge will host a National Electric Drive Week event in downtown Baton Rouge on Monday, September 12, 2016! There will be lots of different electric vehicles on display and a movie playing on the media beacon by the town lawn.
Schedule:

11 AM - 2PM: Vehicle Display with exhibitors/tables by the BR Sierra Club and Louisiana Clean Fuels

(Postponed) 11AM:  Press Conference with the City of Baton Rouge

Noon:  Movie showing on the town beacon, "Revenge of the Electric Car"

Bring the whole family and join us on the town lawn for an afternoon of fun! Map of Town Square
Learn more about electric vehicles and incentives by visiting PlugInLouisiana.com
Photo from NDEW 2015 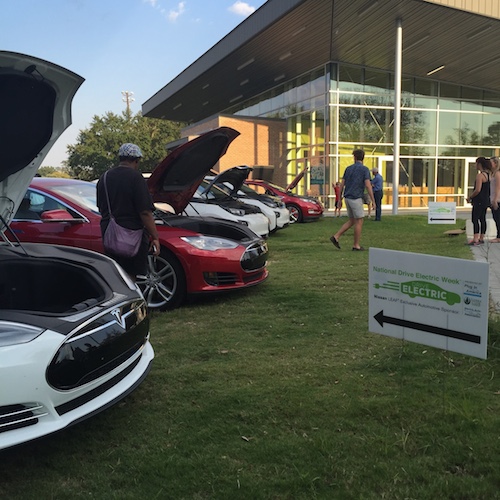 There are currently 28 attendees registered.