Organized locally by the Tucson Electric Vehicle Association, NDEW-Tucson is the "kickoff party" to approximately 12
events where our EAA chapter displays electric cars between September and April each year. Because of the hot and humid weather we have in our area in mid September, we've learned that it's to our advantage to start bringing much of the scheduled NDEW activity indoors and simplify our outdoor presentation. The film "Revenge of The Electric Car" was presented with an enthusiastic group inside the air conditioned library meeting room, while a dedicated contingent viewed vehicles displayed in front of the library's main entrance. All vehicles displayed this year were privately owned or leased and the collection was a pleasantly diverse one, with the full compliment of OEM EVs currently available in southern Arizona and a couple of custom EV conversions.

For Tucson's 5th annual National Drive Electric Week (NDEW) event, the Tucson Electric Vehicle Association (TEVA)
is proud to present the film Revenge of The Electric Car at the Joel D. Valdez Main Library meeting room on Saturday,
September 12, 2015, at 3:00PM. The movie is free and open to the public. 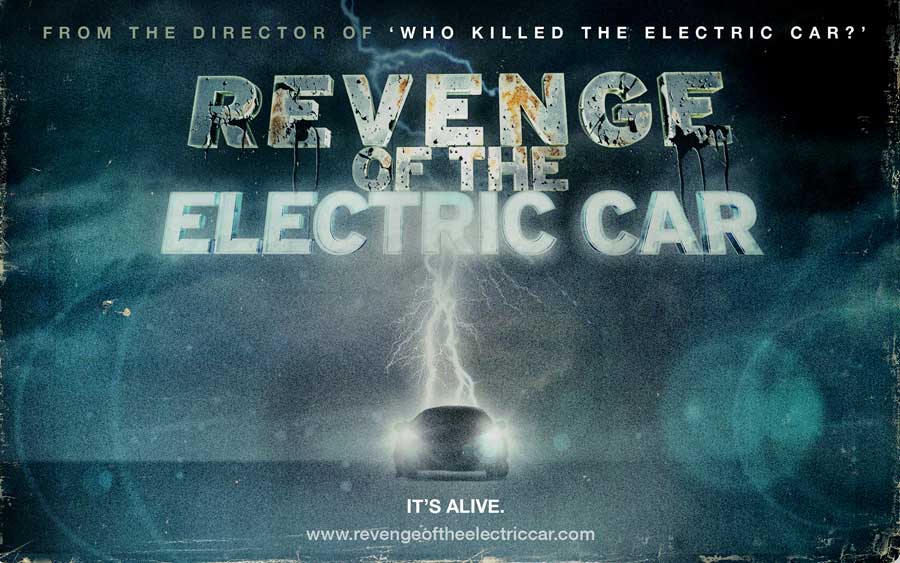 In the hour leading up to and following the movie's 3:00PM screening, several electric cars owned by TEVA members will
be parked on the plaza in front of the library entrance, with the owners on hand to provide information on their vehicles and
electric cars in general. There will also be a short talk prior to the movie, at approximately 2:30PM, with information regarding
the purpose and scope of NDEW events, TEVA's mission in the Tucson community and a preview of the numerous events
TEVA will be attending or hosting in the coming months.

Revenge of the Electric Car is the 2nd production from documentary filmmaker Chris Paine. A followup to the influential
2006 Who Killed The Electric Car?, the movie's backdrop is set against the precarious Great Recession financial period of
2007 to 2010, when several industry leaders were about to introduce the first production electric cars available for general
sale to the public in over a century. Follow the exploits of three industry leaders, representing Tesla, General Motors and
Nissan - and a lone entrepreneur who converts old gasoline cars into electric vehicles in his own garage - as they battle
the odds to make petroleum-free motorized transportation into the reality we enjoy today. Whereas Chris Paine's
freshman film ended in uncertainty for the electric car's future, with a handful of vehicles being crushed in the desert,
Revenge of The Electric Car caps off on a triumphant note, with the foreshadowing of what is now over half a million
production electric vehicles being driven every day in countries all over the world.

In addition to being the inaugural day of NDEW events across the United States, Saturday, September 12th, is Tucson's
monthly 2nd Saturday Downtown celebration. From approximately 5:30PM to 10:30PM, various retail businesses, nightclubs
and restaurants will be open throughout the downtown, with live music and other activities of interest available to you.
Following our special late afternoon movie presentation at the main library, TEVA encourages you to partake in the
festivities just a few blocks and walking distance away.

Parking - with a limited number of EVSE terminals - is available at the Pima County Public Works Garage, immediately
to the north of the library. We do, however, ask you to consider using that "other" electric vehicle, the
Tucson Modern Streetcar.