The event was held at the Vernola Marketplace in the City of Jurupa Valley.  The Tesla Service Center from Rancho Cucamonga brought 3 Model 3's for test drives and the employees were kept busy talking about the cars and offering test drives throughout the event. The event was organized by the members of the Inland Empire Electric Vehicle Association. The IEEVA club members are also founders of the Tesla Club of Riverside County and the Tesla Club Inland Empire. The other club with members attending the event and helping was the Electric Vehicle Association of Southern California.Our financial sponsors were Southern California Edison and Electrify America. Thanks to their grants, we advertised for several days on an electronic billboard facing the 15 freeway, close to the event site, as well as social media boosts. We  also offered a many raffle prizes including a wall mounted Level 2 charger donated by the City of Colton Electric Utility.  We had a loop of test drive videos playing on a television that we also gave away  during the raffle at the end of the event. We had City of Jurupa Valley Councilmember, Chris Barajas, attend the event and say a few encouraging words about transportation electrification.  Also, Colin Markovich, from the Office of Assemblymember Sabrina Cervantes, presented the IEEVA club with a Certificate of Appreciation. We had a variety of vehicles on display. An electric conversion of a 1960's era Corvair, a Smart EV, several Chevy Bolts, a Volkswagen ID.4, several Tesla models were well represented. The heat may have kept some attendees away in the afternoon, but considering the circumstances, we had a very good event. Andy Huynh, IEEVA Club President took some great videos as usual and shared it to the IEEVA Facebook page:  https://m.facebook.com/story.php?story_fbid=597937908290515&id=100262751391369

Join us on the last day of National Drive Electric Week to see electric vehicles and talk to their owners about how much they love their cars.

We will be located at the Vernola Marketplace in Jurupa Valley. The center is located near Interstate 15 and Limonite. Exact location is the far south end of the shopping center near Lowes and Fitness 19. The City of Colton Electric Utility has donated a wall mounted charger for a raffle prize. We will be drawing the winner of the charger around 12:30pm. We will have another raffle drawing at 2pm for other prizes. 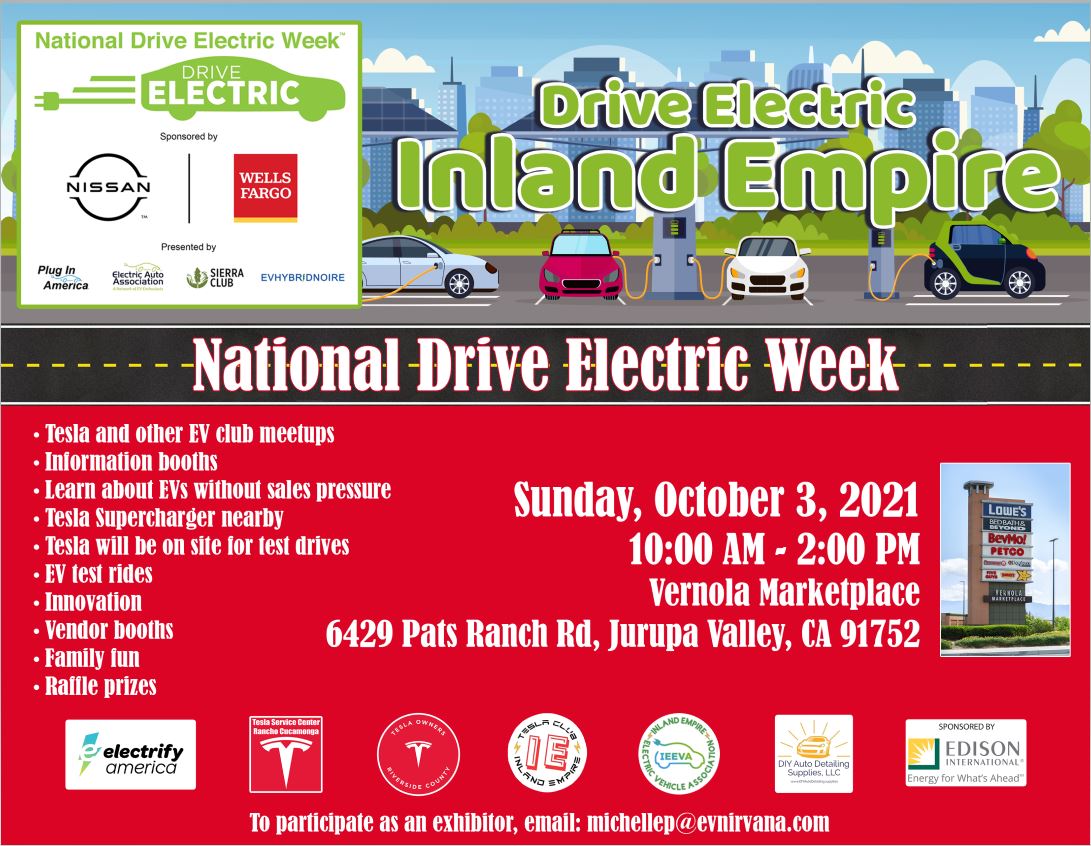 There are currently 124 attendees registered.