What a great event!
27 EV owners came to share their wonderful stories.  They brought everything from a Zero motorcycle, to a Chrysler Pacifica PHEV, to a Kia Soul EV (shipped all the way from Utah, since we can't get them here in TN).  Of course, there were a number of each of the Teslas, with the "X" doing it's choreographed opening/closing music dance periodically to liven things up.  We had a variety of Chevy Volts and Bolts, and Nissan LEAFs (older & newer ones).  And we had a couple of the cute BMW i3s thrown in for good measure.  One an REx.  Also present was the Shockwave Defiant EV3 prototype roadster.
Thanks to the various dealerships that brought a Volvo T8 series, a Mercedes Smart car and a Mercedes GLC 350, and an Audi e-tron.  People were oohing and aahing over them. They took a number of drives in them.
We had several vendors, including the Knoxville Utility Board (KUB).  KUB is offering incentives to buy EVs.  They brought their KUB wrapped Nissan LEAF for show.  Other vendors were Solar Alliance, West Bicycles (who brought e-bikes to test), Star Powersports & Marine with an electric utility cart, and Zagster's Spin scooters, that you see everywhere in downtown Knoxville.  Zagster also allowed test drives.  Sierra Club had literature available.  In the Kidzone, future drivers could draw what car they would like (when they grow up) and show off their artistic skills by chalking the parking lot!
We, also had live & recorded music throughout the day, everything from bluegrass to Americana to blues.
A special thanks to Southern Alliance for Clean Energy for allowing many, many ride & drives with the organization's Model 3 Tesla.
Many thanks to Jonathan Overly and the East Tennessee Clean Fuels Coalition for staffing the very hectic booth where people could sign up to drive or ride in the numerous available vehicles.
Thanks to Will Schleter for his drone and other photos.  They can be viewed here:  https://photos.app.goo.gl/CDhs23KwZibctXYB8
Another thanks with hugs & kisses to my grandkiddos (Dominic, Isabel, Violet, and Juliet) for bringing their Radio Flyer Tesla Model S kiddie car for show (mostly).
There were copious amounts of literature at the Knoxville Electric Vehicle Association (KEVA) tent about EVs and PHEVs, take home goodies, such as pens and water bottles (from Nissan).  We held a raffle for a Tesla ball cap, Fisher Tire gift card, Whole Foods gift card, and West Bicycles gift card for some lucky winners.
Finally, thanks to Jack for creating numerous informative EV foam core boards, such as: Myth Busters, the 3 E's (Economical, Environmental & Enjoyment of EVs), etc., that were also on display at the KEVA tent. 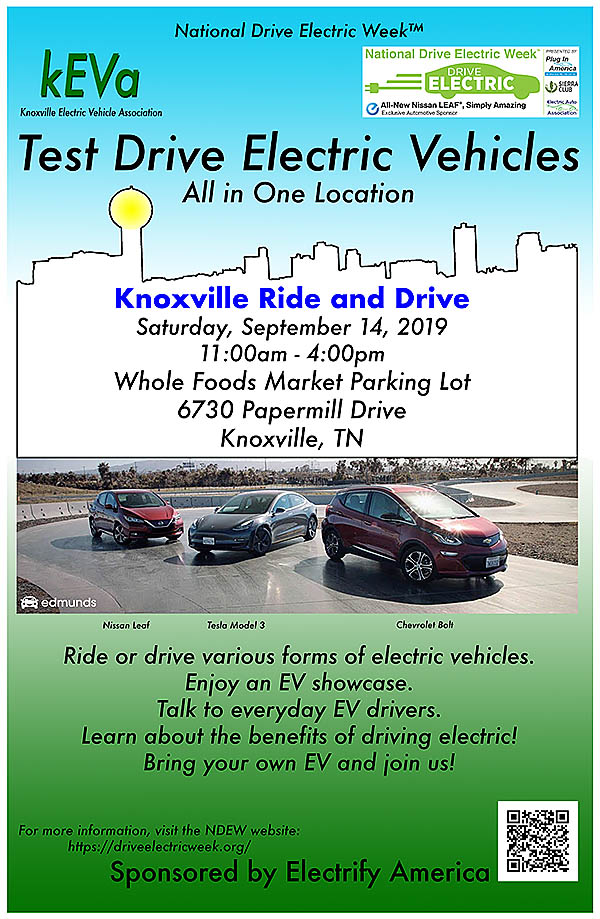 Knoxville area electric vehicle drivers and enthusiasts will be on hand to talk about the benefits of driving electric and also offer ride-and-drives. Owners will display the total number of petroleum-free miles driven for each vehicle to highlight the clean-air benefits and cost-savings of electric cars. The event is part of the ninth annual National Drive Electric Week.

The event will host electric and hybrid vehicles from various local dealers.  Some will be available for attendees to drive. Owners will bring additional vehicles, with some offering rides.  The purpose of the event is to allow the public to experience the efficiency, economic value, and fun of electric vehicles.

We are expecting the following cars:

In addition, you will find a list of cars and motorcycles that our volunteers are bringing elsewhere on this page. 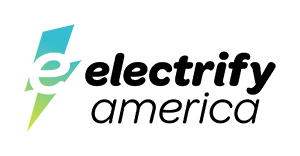 There are currently 87 attendees registered.