The Lawrence Electric Vehicle Showcase was organized by the Sustainability Action Network with the help of our co-sponsors, The Sierra Club/Wakarusa Group, and The Merc Co+op grocery store. We held the event in The Merc's parking lot where they had just installed two 16-bay solar PV carports and an EV charging station.

The Sustainability Action Network is presenting this plug-in electric vehicle (EV) showcase, in conjunction with The Merc Co+op and the Sierra Club: Wakarusa Group. 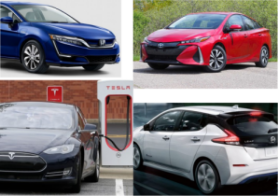 The Merc Co+op features solar parking canopies and a solar powered EV charging station. When an EV is solar charged, it can truly be a net-zero carbon vehicle. Even if charged from a fossil fueled utility, an EV has a much lower carbon footprint than a petroleum auto.

With no engine, transmission, distributor, starter, clutch, muffler, or catalytic converter, an EV is significantly lighter than a gasoline car. And electric motors are more energy efficient than internal combustion engines.

Driving on electricity is about five times cheaper than fueling with gasoline. EVs get 100mpg equivalent or better. The driving range of most EVs is from 100 miles to 315 miles, and they are capable of quick recharging to 80%. EVs are smooth and quiet and fun to drive, with high torque and instant acceleration.

There are currently 45 attendees registered.