This was our fifth show, and by far the best one so far. Contributing to our success was our new location in the Cranberry Square shopping center along the access road to major big box stores. We enjoyed a constant flow of visitors to the show, and the EV owners were continually occupied in conversations. There was a sense of companionship among the owners sharing in a common experience.

There was a good representation of makes and models. Tesla S, X and 3, Ford Fusion and Focus, Chevy Volt, and Bolt, Nissan Leaf, Cadillac ELR, Mitsubishi iMEV, and perhaps the hit of the show, Cheryl Bejgrowicz, brought her Honda Clarity PHEV.

Disappointing was the lack of participation from Dealers and Manufacturers. With the exception of Kenny Ross, the local Nissan Dealer, and Honda
North that supplied a Clarity PHEV , none of the other invited dealers made an appearance, even though some of them made a commitments to bringing a vehicle.

The Electric Car Show will take place September 15 from noon till 4pm at:

The show is open to all owners, dealers, and manufacturers of plug-in BEV (Battery Electric Vehicles) and PHEV (Plug-in Hybrid Electric Vehicles) including cars, trucks, buses, motorcycles, bikes, tractors, boats, go-carts, and any vehicle that plugs into the electrical grid or solar power supply. 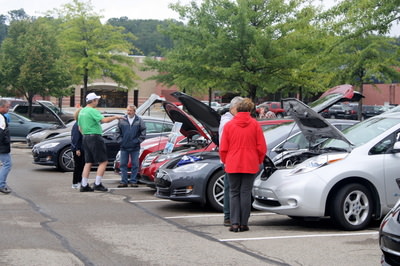 There are currently 38 attendees registered.