Every presentation and service that I’d asked for showed up. And the most important was an energetic volunteer contingent. The canopies, tables, chairs and all were deployed in plenty of time.
As soon as the neighbors showed up, EV owners started giving rides. Rebate programs and other tables started getting some action, and even cooler, some important players in the EV movement showed up and made connections. Jessica Ramirez from Primestor, the development company putting together the new Jordan Downs development, came by and got talking with LADWP Commissioner Bill Funderburk about putting solar on the roof of the buildings there. Joel Levin from Plug In America came by, as well as renowned EV advocate Paul Scott. And the number of EV’s that showed up! I’d had 9 EV’s reserved on the NDEW webpage, and although a couple never showed, we had three surprise Tesla's! A hair-raising moment came when a group of neighborhood kids got into Chris Kindle's Tesla, goofing around and honking the horn, and then it started to move! Several people were terrified that a horrible accident was about to happen, when it was revealed that Kindle was showing a young attendee how the Tesla's self-park system worked. The kids weren’t driving it - it was driving itself! It quietly parked itself and shut off. And though they gave us some concern, the kids were a great asset to the event, constantly pushing for rides and raising everyone’s awareness about actually getting into the cars and having the experience.
Funderburk was everywhere, talking with residents, activists, and environmental leaders, giving total involvement to everyone pretty much equally. Paul Scott brought his electric motorcycle, and another one came as well. I had a great drive and ride with a neighbor named Barbara, who rode around the towers with me, and then took the wheel herself for a spell. Toward the end, a young man showed up with a 2008 Tesla Roadster, one of the first ever made.

Following the success of last year's event, we plan an even better event for this year.  St. John's has a spacious parking lot right across the street from the famous Watts Towers and Arts Center.  The Watts Neighborhood Council will again sponsor us, and with a new charger in Watts, plus five more on the way, adoption of EV's is far more feasible now.  We'll do presentations in schools leading up to the event, and we'll invite back the great presenters we had last year to help people get signed up for the generous rebates and incentives available in the area.  Our event was mentioned today in a national Webinar by Sierra Club campaign staff as a huge success, so the Club's support will again energize the event. 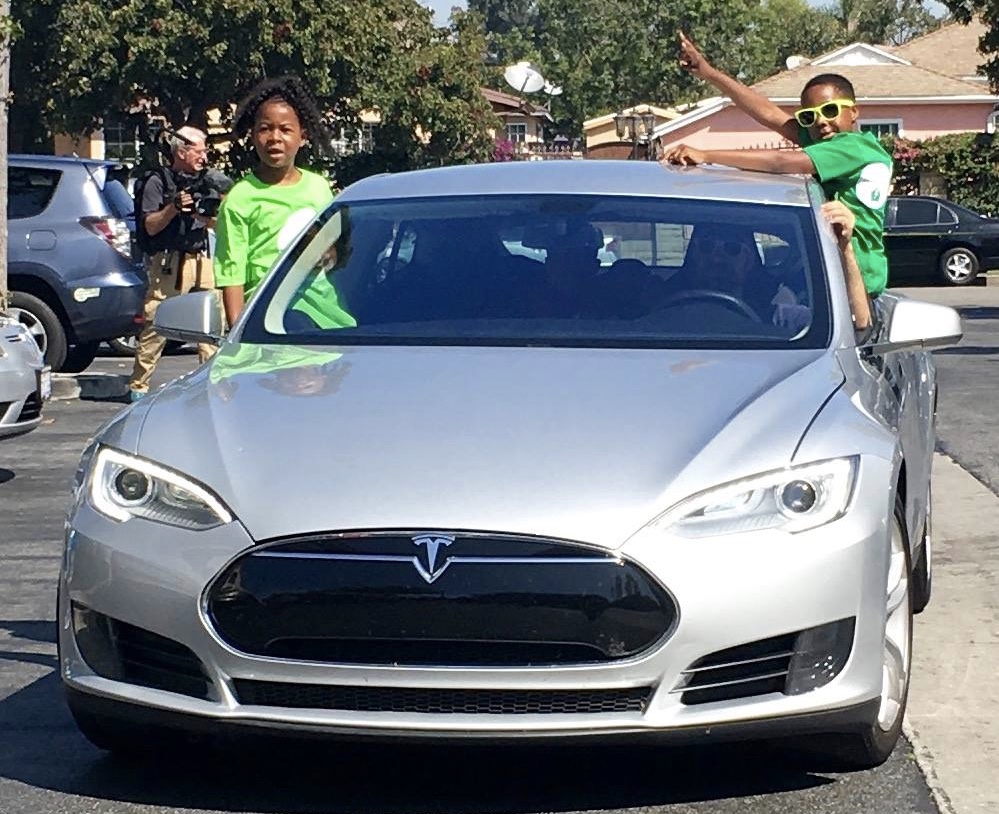 There are currently 34 attendees registered.