“We are proud to host the Capital District Drive Electric Week and Sustainability Fair in Schenectady,” said Schenectady Mayor Gary McCarthy. “Our community has a rich history of innovation, and we are committed to continuing that legacy into the 21st century through climate action and sustainability. From replacing city streetlights to advanced LEDs, to building municipal solar arrays, to expanding our EV charging infrastructure, and growing our municipal EV fleets – as Mayor I will ensure that Schenectady continues to lead the way on climate. I would like to thank our co-hosts Schenectady Greenmarket, Livingston Energy Group and Capital District EV Drivers for their critical partnership on this remarkable event here in the Electric City.”

The goal of National Drive Electric Week is to raise awareness of the many benefits of all-electric and plug-in hybrid vehicles. Members of the Capital District EV Drivers Group and EV owners from across the Northeast have registered over 70 of their personal vehicles to display in the event. For the first time this year, the event featured  ride-and-drive opportunities with Nemer Volkswagen and the Capital District Transportation Authority (CDTA) taking participants on rides around "The Electric City" on their ZEV bus. The event also had a spotlight on schools showcasing Bethlehem Central School District’s ZEV Matthews Bus, and Schalmont High School’s new district EV.  Solar Sal, a 100% electric solar-powered boat, was also on display.

“Schenectady Greenmarket is proud to co-sponsor this event with the City of Schenectady, Livingston Energy Group, and Capital District EV Drivers again this year following our successful Electric Vehicle Fair last year,” said Haley Viccaro, Board Chair of Schenectady Greenmarket. “Schenectady Greenmarket has prioritized being more green and sustainable with the formation of our Sustainability Committee and composting at the market on Sundays. This event highlights the important ways people can reduce their emissions and be more sustainable in their everyday lives, and brings more people downtown to explore and shop over the weekend in the Electric City.”

“Livingston Energy Group is proud to be part of the planning team to bring National Drive Electric Week to the City of Schenectady and the Schenectady Greenmarket,” said Kate Kruk, Director of Community Engagement for Livingston Energy Group and Event City Captain. “Livingston Energy Group prides itself on being a leader in advancing access to e-mobility and enjoys the opportunity to highlight the advances being made in sustainable transportation in the communities we serve. As an early adopter of EV technology myself, it is amazing to see on display the variety of electric vehicles available now and how dramatically it has increased in such a short time. As more consumers adopt EVs, Livingston Energy Group will be here to drive the deployment of EV infrastructure to support them.”

“As an EV driver, it’s so great to see the City of Schenectady celebrating electric and plug-in hybrid vehicles in this way,” said Dave Holland, Planning Committee Member. “I attended this event last year, and it is so exciting to see that it’s doubled in size.”  Holland showcased his all-electric Smart Fortwo that he customized to pay homage to Marvel’s Agents of S.H.I.E.L.D.  He has been driving electric since 2019 and his wife recently purchased a PHEV.

The Electric Vehicle Fair took place in conjunction with Schenectady Greenmarket, which operates year-round on Sundays from 10am-2pm around City Hall from April-November and inside Proctors from December-March. Schenectady Greenmarket attracts up to 3,000 customers each Sunday during the outdoor market season with over 80 vendors on Jay, Franklin, and Clinton streets. During the Electric Vehicle Fair, EV and plug-in hybrid vehicles parked along two blocks of Liberty Street, where Schenectady-based company Livingston Energy Group has 10 EV chargers for public use in partnership with the city.

The City of Schenectady has received Climate Smart Community certification from the New York State Department of Environmental Conservation (DEC) and Clean Energy Community designation from NYSERDA. Under the leadership of Mayor McCarthy, the city has installed 28 EV chargers for public use and has added 22 hybrid and electric vehicles to the city’s municipal fleet. The city also recently acquired 62 lithium-powered golf carts to replace the current fleet of gas-powered carts at the Schenectady Municipal Golf Course.

Thank you to all our event supporters and participants! 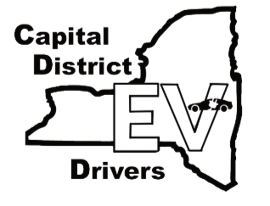 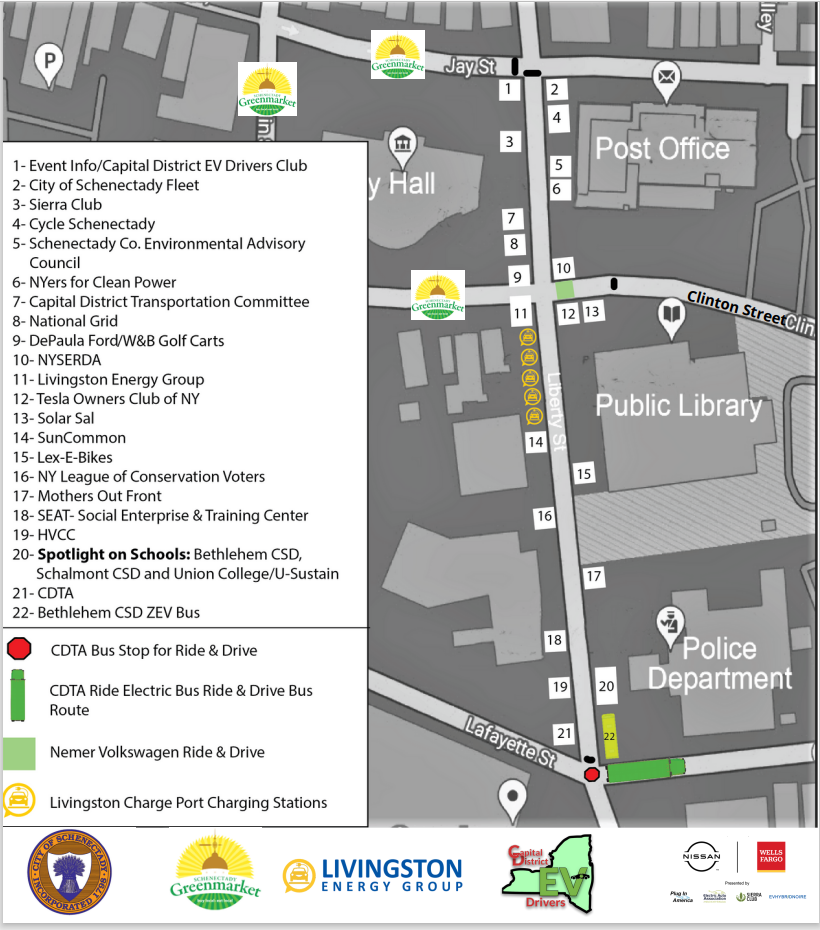 9:45 AM –Members of the event planning committee, Greenmarket, Livingston Energy Group, EV Drivers Club and City of Schenectady to line up at intersection of Liberty & Clinton Street.

Livingston Charge Port EV Charging Stations are available in the event space, throughout the City of Schenectady and across the country!

They can be accessed via the Charge  Port EV App.    Available on Android or Apple devices.

There are currently 694 attendees registered.