We had 59 electric vehicles on display representing more than 1.5 million oil-free miles! The event also included lots of fun activities such as a scavenger hunt with prizes, three student robotics teams and some great exhibits by Puget Sound Solar and Torklift Central and several other vendors. We appreciated visits from special guests including Issaquah Mayor Fred Butler, state Representative Chad Magendanz, King County Council Chair Larry Phillips, and the Governor's Senior Transportation Adviser Charles Knutsen with the Governor's NDEW proclamation. The weather was alternately threatening, then warm and sunny, and the rain held off until we were packing up for the day. Our raffle drawing raised $220, which was more than enough to cover expenses. Raffle donations included a DVD of "Who Killed the Electric Car?" an RC Tesla Roadster with batteries, Nissan test drive gift certificates, and an EVSE! 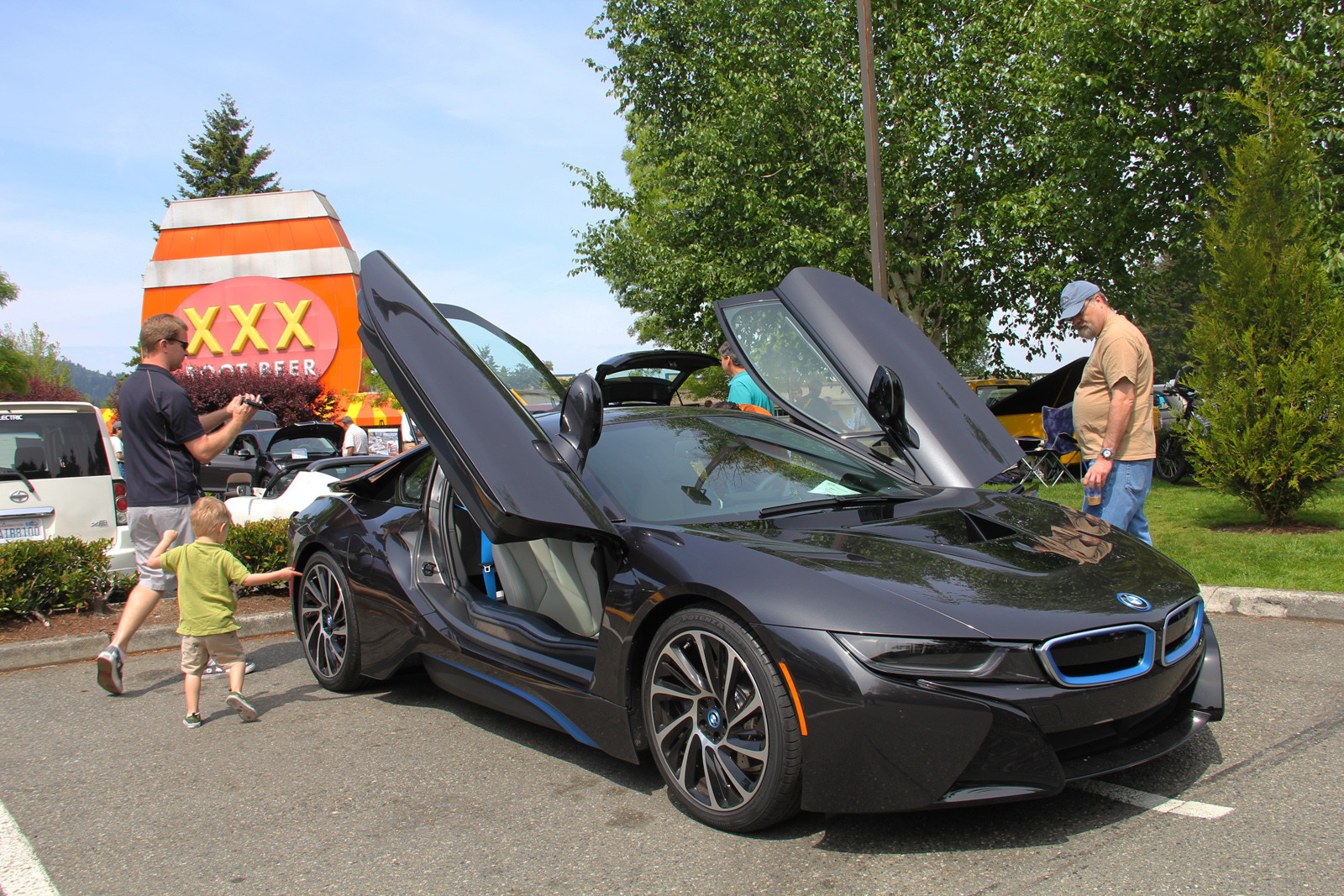 The fifth annual Drive Electric Week hosted by the Seattle Electric Vehicle Association will again take place in the EV-friendly city of Issaquah, a short drive east of Seattle right off I-90. The location is again at the historic XXX Root Beer restaurant, a monument to the history of motoring and a regional destination famous for its weekly car shows. We expect dozens of production and vintage conversion vehicles to be on display with the opportunity to talk to owners about their experiences with driving electric. Enjoy music, prizes and special guests during the day. Come see what is new in the world of electric driving.
SPECIAL PROGRAM at NOON:
* King County Council Chair Larry Phillips
* Issaquah Mayor Fred Butler
* Plug-In America’s chief science officer Tom Saxton
* State transportation officials with a proclamation from Gov. Jay Inslee
* Drawing for donated prizes and merchandise, including electric vehicle charging equipment
ROBOTS!
We will have demonstrations of electric robots built and operated by three different student teams, and opportunities for you to try your skill at operating them!
VENDORS and EXHIBITS:
Learn about electric car charging needs and renewable energy such as solar, and try out different electric cars with test drives and dealer exhibits.
FOOD:
Enjoy vintage-style burgers and frosty root beer floats available from our fantastic hosts at the legendary XXX Root Beer restaurant.
JOIN:
Join the EV revolution by becoming a member of the non-profit Electric Auto Association and the advocacy organization Plug-In America. Special discount membership rates available only at this car show!
PRESS RELEASE:
Sept. 8, 2015

Also on Sept. 20, electric vehicle owners will get a chance to race and demonstrate the instant acceleration that makes electric driving so thrilling in the second annual Silent Thunder event at Pacific Raceways at 31001 144th Ave SE in Kent. The full day of 100-percent electric racing is an official event of the National Electric Drag Racing Association and is open to the public. The day features an exciting combination of road racing in the morning with a professional race driver leading on the 2.5-mile road course, and then continuous drag racing in the afternoon on the quarter-mile drag strip. Doors open at 7:30 a.m., and racing continues until 3 p.m. Admission is $15 adults, $5 ages 12-17, and free for younger children.

“Demonstrations of electric driving, along with owners sharing their experiences, will make this day a terrific opportunity to learn about why Washington, and particularly King County, has the highest rate of electric vehicle ownership in the country,” said Stephen Johnsen, president of the Seattle Electric Vehicle Association (SEVA). “Locally, our low electricity costs, renewable energy sources and high gasoline prices combine to make electric driving a cost-effective, efficient and compelling transportation option. Electric cars may be zero-emission and good for the planet, but they also are incredibly fun to drive. Get ready to burn rubber without burning oil!”

Capping the many activities planned across the country during the Sept. 12-20 National Drive Electric Week, the Issaquah car show will showcase dozens of different vehicles, including classic cars that have been converted to run on electricity as well as production vehicles such as the Tesla Roadster and Model S, Nissan Leaf, Ford Focus Electric, Mitsubishi i-MiEV, Toyota RAV4 EV, BMW i3 and i8, Fiat 500e, Kia Soul EV, electric motorcycles and plug-in hybrids, among others. Dealers of select models will have test drives available, and other sustainability representatives such as solar power installers will be on hand to demonstrate how driving electric vehicles and using renewable energy saves money while also saving the planet. The day will include:

The National Drive Electric Week events are co-sponsored by the non-profits Plug-In America, the Electric Auto Association and the Sierra Club as well as Nissan.

With members all over Western Washington, SEVA is the second-largest chapter of the national Electric Auto Association. SEVA also has helped establish other chapters in Tacoma, Wenatchee, North Puget Sound and Vashon Island. Formed in 1979, the all-volunteer organization welcomes anyone interested in the mission of “education, demonstration and proliferation of electric vehicles.” Monthly meetings are the second Tuesday of each month in Wallingford in Seattle. For more information, visit the SEVA website at www.seattleeva.org.

There are currently 253 attendees registered.