We gathered a small 'EV Bloc' at the People's Climate March in New York City. There were more than 300,000 people marching the streets of New York demanding action from world leaders on climate change. Our 'EV Bloc' members were from all over the northeast, including plug-in car and plug-in motorcycle drivers. We had about a dozen people who came to be part of our 'EV Bloc' (plus several more who apparently came but couldn't find us because it was so crowded). We all had EV signs that said things like "Don't Pollute on Your Commute;" "Gas Sux;" "Electric Cars are Sexy;" and "Cars Don't Need Fossile Fuels." I'm conservatively estimating that about 300 people saw our signs. My "Electric Cars Are Sexy" sign was apparently so appealing that someone stole it while I was in a porta-potty for 60 seconds!

EV Bloc Joining National Drive Electric Week at the People's Climate March
Planning to attend the People's Climate March in New York City on Sunday, Sept. 21? Expected to be the largest climate rally ever held, this rally will send a strong message about the need for aggressive climate action. World leaders gathering at the United Nations this week to discuss global climate disruption should hear the message loud and clear. Join our 'EV bloc' of EV enthusiasts at the rally!

While the march will be way too crowded to show off our plug-in cars (please don't bring them!), it will be a good opportunity to show our EV enthusiasm to the crowds and the media at the march. One of the many reasons we love EVs is that a switch to plug-in cars helps us slash climate emissions. Please bring your own home-made EV signs, and we'll bring some extras for those who need them.
We'll gather at the Starbucks at 1889 Broadway at 11:00 and then proceed together to the start of the march site. The march will go on for much of the afternoon, but stay with our 'EV bloc' for as long or as little as your schedule allows, including the need to meet up with other groups. [Note, it is possible our meet-up time or location will change, depending on Climate March logistics, so please check this page again a couple of days before Sept. 21, and we will email updates to those who register as an attendee on this page.]
More info about the People's Climate March, being organized by hundreds of organizations and thousands of people, is at http://peoplesclimate.org/march/. See you there!
This 'EV Bloc' gathering at the People's Climate March is being held in conjunction with National Drive Electric Week, with EV promotion events in 135+ cities. The national organizers of National Drive Electric Week (called National Plug In Day in years past) are Sierra Club, Plug In America, and the Electric Auto Association. 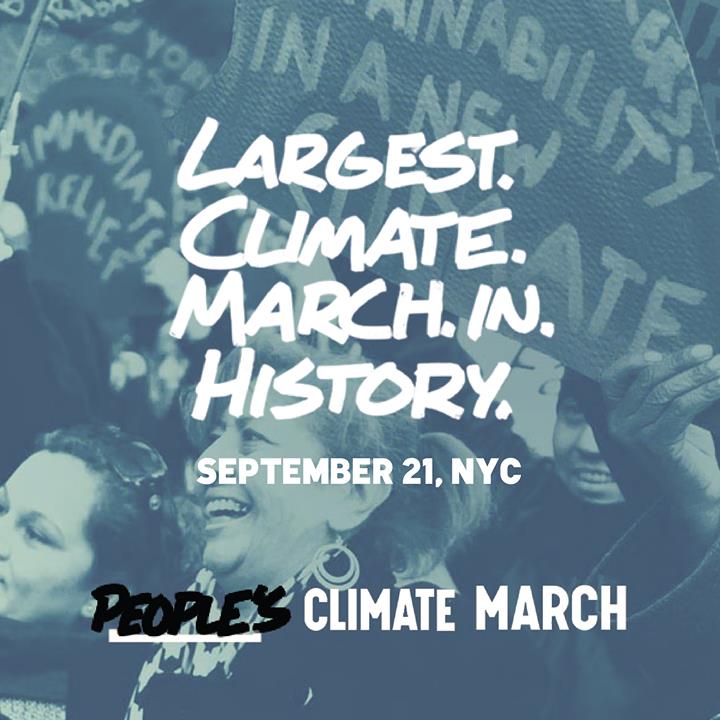 There are currently 41 attendees registered.