Hyattsville's 4th Annual EV Car Show was a great success and the largest one to date.  This year the weather was great, there were a large number of electric vehicles on site (60), and the steady, attending crowd was full of questions and compliments.  Sport Chevrolet was on hand with two Bolts allowing test drives, PEPCO was promoting their new "EVSmart" programs, and a rep from "GoCycle" had a very busy day allowing test drives of their new eBikes.   Again this year our Premier Sponsor was The Electric Vehicle Institute (EV-I) of Baltimore, Maryland.  EV-I donated two Level 2 Chargers ($500 each) as grand door prizes, and their booth was well attended all day long with attendees asking questions about getting commercial charging stations installed.

Nissan was on hand displaying the 2019 Long-Range Leaf, Rockville City Police came a long way to display their All-Electric Parking Enforcement Vehicle, and the Maryland Energy Administration (MEA), the state agency that funded the Hyattsville Police Department's All-Electric Police Patrol Vehicle and All-Electric Police Motorcycles (on display for the third year in a row), had their 2013 Chevrolet Volt "Official Agency Vehicle" on display with its beautiful "state flag" logo and markings.  MEA rep Brendan Bowser explained to the public what the agency's role was in proving grant funding for local governments and private businesses to assist them in becoming more energy efficient.

We had great music from a local DJ, great food from the Roaming Rooster, delicious dessert from Mister Magic's Soft Serve Ice Cream, and door prizes given out every half hour.   The event was well attended by the public and various local city officials.

We are already looking forward to our next Electric Vehicle Car Show in 2020.

Come join us for the City of Hyattsville's 4th Annual Electric Vehicle Car Show, as part of National Drive Electric Week.  In addition to a multitude of EVs from manufacturers such as Tesla, BMW, Chevrolet, Kia, Nissan, Hyundai, Zero Motorcycles, and more, there will be representatives from the Electric Vehicle Institute in Baltimore, Maryland displaying EV charging stations. PEPCO will be on hand to talk about incentives for installing charging stations in your home or business and there will be "e-Bikes" on display, and possibly test drives of electric vehicles.  See the country's FIRST All-Electric Chevrolet Bolt Police Car, as featured in Chevy's New Roads Magazine and NBC Channel 4 News!

There will also be food trucks, ice cream, door prizes and giveaways, as well as frameable certificates for all EV owners.  Last year we had 55 electric vehicles registered, and we hope to have an even bigger show this year! 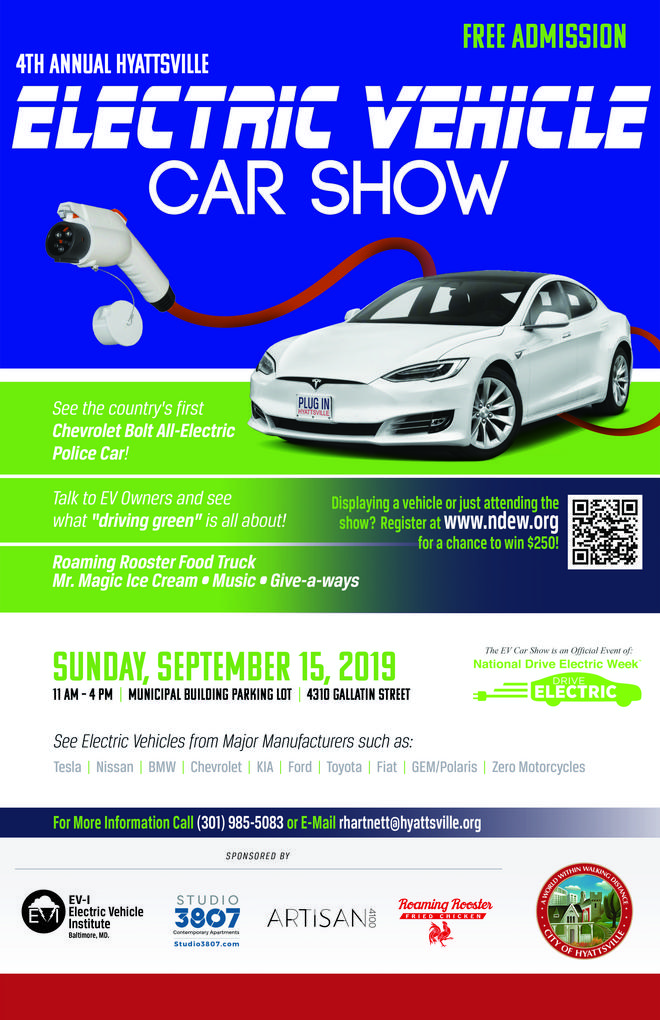 There are currently 180 attendees registered.