The Mayor of Annapolis Mayor and two aldermen came. The Mayor presented us a proclamation proclaiming: "September 8-16, 2018 to be Drive Electric Week in the City of Annapolis."

Just to show the enthusiasm of EV owners, of the 60 vehicles registered, 30 showed up in a day-long rainstorm.

This being a sailing town, a local company that installs electric motors in boats had a display as did a community solar company.

We promoted the event on social media, in local newsletters and electric announcement boards, and with signage all over town, including a banner over the street where the event was held, which was installed a week before the event.

Had it been a good, or even moderate, weather day, we would have been slammed with people. 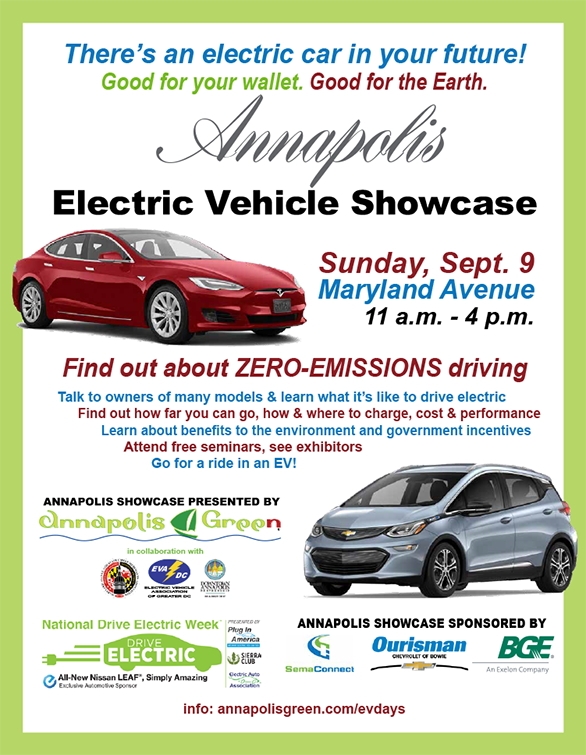 UPDATE: There is rain in the forecast for tomorrow, September 9, but the show and the seminars are ON!

Our 2018 event, sponsored by SemaConnect, maker of EV chargers; BGE; and Ourisman Chevrolet of Bowie, will be bigger and better than ever! We will feature the Hyattsville Police Department's EV patrol car and electric motorcycle.

We have 59 vehicles (22 models) registered to attend so far including:

Together they represent more than 1.1 million electric miles driven!

Want to try out an electric car? Some owners will offer free ride and drives!

The Inn at Horn Point, B&B in the Eastport section of Annapolis that has installed two Tesla Destination Chargers

And of course, Maryland Avenue is a marvelous shopping street, particularly if you like antiques; vintage, new and custom clothing; gifts for the home; books; and jewelry, art. At the top of Maryland Avenue is the State House or capitol building. The Maryland State House is the oldest state capitol in continuous legislative use, dating to 1772. It houses the Maryland General Assembly and offices of the Governor and Lieutenant Governor. The capitol has the distinction of being topped by the largest wooden dome in the United States constructed without nails. The current building, which was designated a National Historic Landmark in 1960, is the third statehouse on its site. The building is administered by the State House Trust, established in 1969.

Come to beautiful, historic Maryland Avenue in Annapolis to enjoy our EV Showcase and then shop the boutiques on the Avenue, enjoy a brew at our very own Irish restaurant, Galway Bay, and explore Annapolis' historic properties and waterfront.

Thank you to our local sponsors!

Here is a link to to our very successful 2017 event.

There are currently 129 attendees registered.