The total number of people exposed to the event is hard to say, since people come and go over the 5 hour period, but due to the fact that it rained almost the entire day, our numbers were very small compared to what we were expecting. (We were hoping for 500+)

Despite the lousy weather we had a nice showing of cars. 54 registered, 44 came, so that was nice. We had Food Trucks, Ice Cream, DJ Music, Balloons, Door Prizes every hour (donated by local businesses), and a continuous video of "rarely seen" television commercials for EVs showing in our building's "multi-purpose" room. (That video was a big hit, with many people asking for a copy of it.) The Hyattsville City Mayor, Police Chief and City Administrator were present, as well as Fox Channel 5 News (Washington, DC). Like last year, we had the country's first Chevrolet Bolt All-Electric Police Patrol Car on display, as well as a Zero DSP All-Electric Police Patrol Motorcycle.

BMW was supposed to be at the event with "Ride-N-Drives," but they did not show up or notify us that they were not coming, so that was disappointing. (A local BMW dealer did bring two cars, but did not offer rides/test drives.)

Nevertheless, we considered the event to be a huge success, with many kudos and accolades from both visitors and politicians, and we are already planning next year's event! 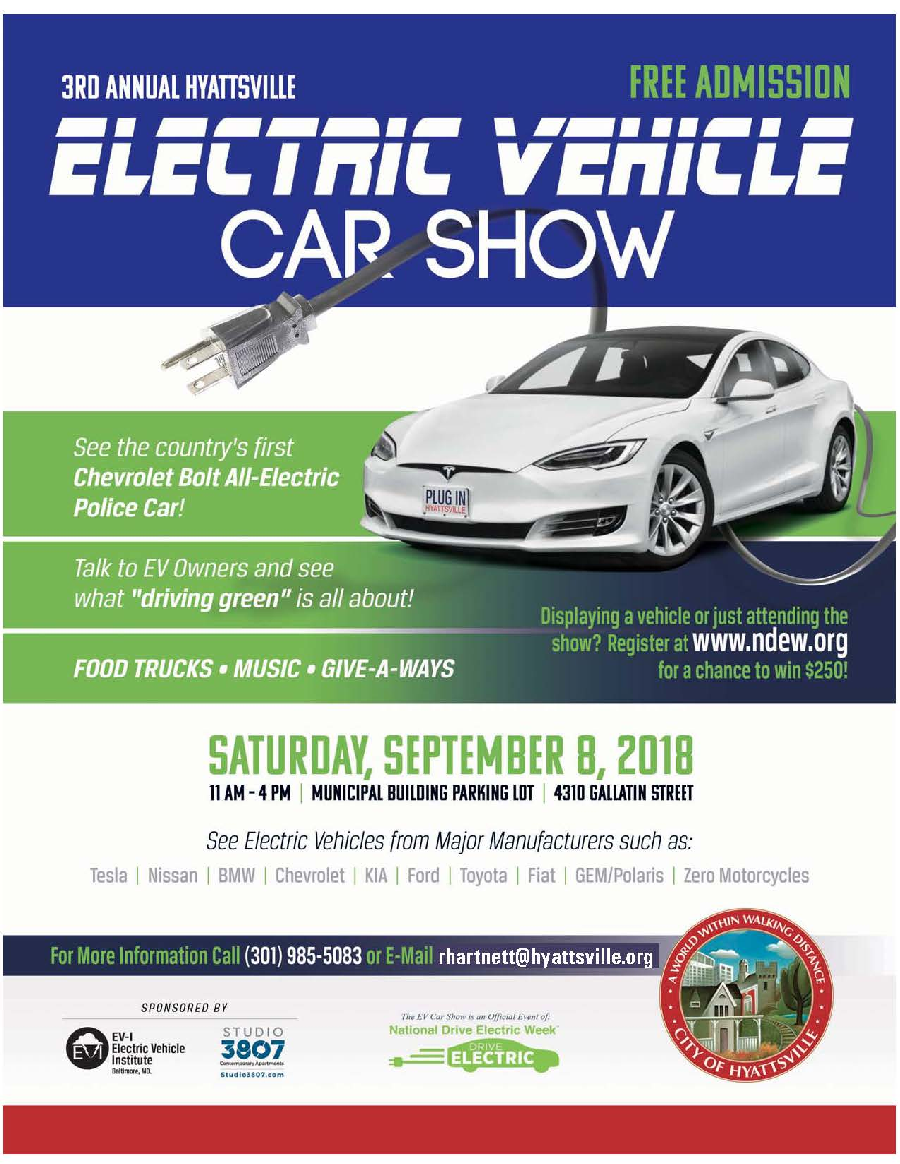 The City of Hyattsville will be hosting its 3rd Annual "Electric Vehicle Car Show" in the parking lot of the City Municipal Center, to kick off the beginning of "National Drive Electric Week."  We had 28 electric vehicles at last year's show, and we are up to 54 so far this year!  In addition to other give away items for all in attendance, our EV owners will receive a special door prize ticket for a chance to win one of two Portable Level 1/2 EVSEs, provided by the Electric Vehicle Institute of Baltimore, Maryland, a sponsor of this year's event.  Like last year, this year's show will feature the first fully marked Chevrolet Bolt Police Cruiser in the country, and an all-electric Zero DSP Police Motorcycle, as well as various EV makes and models from owners all around the Washington, DC Metropolitan area.   This year we also feature on-site Level 2 and DCFC charging, free of charge, as well as Music, Food, Ice Cream and valuable information about Electric Bicycles (E-Bikes), EV Charging Stations, Solar Panels and more!

Whether you are an EV Owner registering to display your vehicle, or just interested in attending the show to learn about and/or possibly test drive electric vehicles, click the blue register button at the top of this page, complete a short survey, and you'll be entered to win a chance at $250.

There are currently 170 attendees registered.