This year was certainly bigger and more active
than our previous events, and there were a couple of important reasons.

First, the participation of Tesla in a low-income community of color when the
other dealers who had committed to come failed to show sent a powerful
message. Tesla is the only car company in our market that has
put all its eggs in the electric basket. Nissan still spends some ten times
the money on advertising Titans and Rogues than it does on LEAFs. And Tesla's
new Model 3 is handily walking away with their lunch money. A couple of owners
brought Tesla's as well, and I think there's a bit of a message in a person of
color driving a Tesla and showing up in Watts to talk to the community about
it. And Jamie with the Tesla Roadster came back for the second year in a row.

The second reason our event marks a leap forward is the switch that was
flipped on our new solar array at St. John's United Methodist Church. This shows
the community in Watts getting its act together and joining the clean energy
future. The organizing gambit in putting an EV event in Watts is to challenge
the easy assumption that a low-income community is naturally going to take a
back seat when it comes to new technology. This is one low-income community
that doesn't agree. LADWP Commissioner Aura Vasquez and former Commissioner
William Funderburk spoke powerfully about the advocacy of the Watts
Clean Air and Energy Committee bringing more solar, more energy efficiency
upgrades and more car chargers to Watts. Our group will be speaking before
the Commission in the coming months to get them to reverse their neglect of
communities in South LA. We're still far behind the richer parts
of LA, and we don't feel like putting up with it. 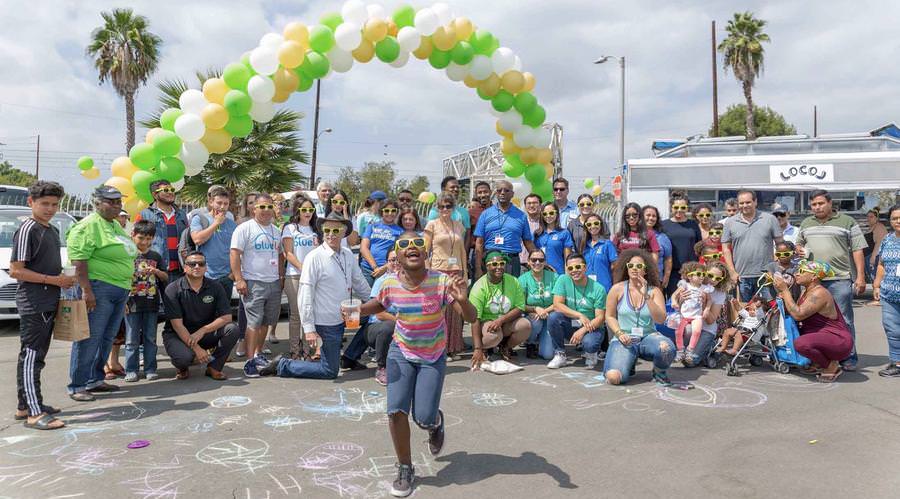 The Third Annual Watts Electric Car Drive & Ride will showcase Watts' continuing evolution as a clean energy hotspot.  The new MegaWatts Solar installation on St. John's United Methodist Church will overlook our celebration of the continuing transition to clean transportation.   EV drivers, electric car dealers, EV ride share companies and other innovators will join LADWP, SCE, the Clean Vehicle Rebate Program and the Replace Your Ride Program in helping community residents figure out their options and the growing number of incentive programs that can lighten the financial burden of making the switch.  They're featured in this video of last year's event, which shows the forces in community and government that are shaping Watts' future. Press the  link to watch.

The event will be hosted by the Watts Clean Air and Energy group, which is pulling together numerous elements of the neighborhood to create an even livelier and more informative event than the previous two.  Food, music, special activities for children, as well as local personalities and environmental leaders are among the attractions to expect.  We also hope to announce a new EV charging facility at the nearby Watts Towers.

There are currently 52 attendees registered.